It feels like it was yesterday when the entire RDC team went to Vasc Country to install our first raft, the first floating UHPC farm in the world. It was October of 2016. Now, 6 years later, is already a good moment to start checking if this solution is as good as we promised under the dynamic and aggressive marine environment.

Traditional rafts are 20 x 27 m floating structures typically made of eucalyptus wood and six steel floaters protected with GFRP. These structures are flexible and economic, but their lifespan does not generally exceed the 15 years, and their maintenance costs are significant. This problem was noticed by RDC, which designed and patented a UHPC raft in 2015. 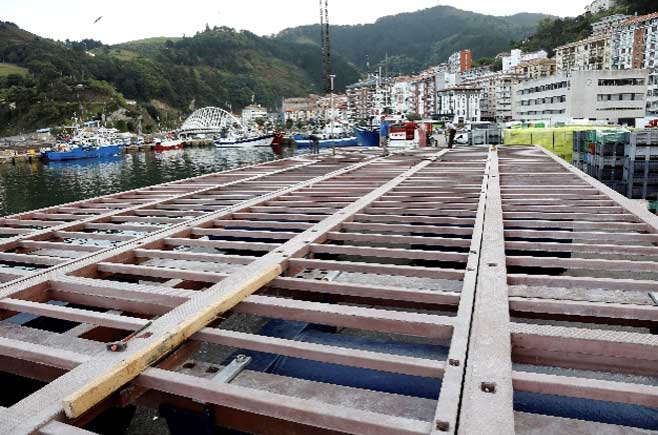 It feels like it was yesterday when the entire RDC team went to Vasc Country to install our first raft, the first floating UHPC farm in the world. It was October of 2016. Now, 6 years later, is already a good moment to start checking if this solution is as good as we promised under the dynamic and aggressive marine environment.

These structures are flexible and economic, but their lifespan does not generally exceed the 15 years, and their maintenance costs are significant. This problem was noticed by RDC, which designed and patented a UHPC raft in 2015.

This was a bold idea. UHPC is rarely used in civil engineering, and concrete is not a well-accepted material among seamen because they have seen many corrosion pathologies in ports. So, as you can imagine, we were among the very few that trusted that this was going to work.

Other companies failed in the past testing a polyethylene raft, so the responsiveness of the sector to innovations was limited. Both engineers and seamen doubted that a UHPC beam can resist with less than 3 cm of cover the water chlorides, the fatigue of the waves and the acid feces of the seagulls. For this reason, we did not find in Galicia, a region with 3.337 rafts, any farmer that wanted to purchase a first structure to demonstrate its durability. Luckily, we met AZTI, the Basque Marine and Food Research Center, which decided to build this prototype the first raft of all their region! The pictures below show some operations during the assembling and launching.

Well, a few weeks ago we had the chance to go there and physically inspect the structure. Even though I rely blindly on Formex® structures, I recognize I was a little bit nervous to inspect after 6 years a structure that is under the continuous sway of the waves.

When I jumped on the boat, I noticed that it was in perfect condition After more than 2.200 days, with 0 euros required in maintenance or cleaning, the UHPC raft has the same aspect as the first day.

Cracks were not found, and the connections between elements were in perfect conditions. Only in certain regions it was possible to identify, as in any exposed UHPC structure, the spots of rust of the steel fibers in contact with the surface.

These visual inspections reinforce our confidence in our products, but we know that they are not enough to state that they are healthy. We wanted to prove that the steel strands are not suffering corrosion, and we did in the next TRL7 prototypes that we tested in other sea basins.

To fund this challenge, we applied for a SME Instrument Phase 2 project and the EU commission granted it to us (SELMUS-738777). With it, we succeeded finding two farmers to test in Galicia and other two in Valencia.

With the support of the Interuniversity Research Institute for Molecular Recognition and Technological Development (IDM) of the Universitat Politècnica de Valencia, we installed in two of these structures a remote monitoring system which showed us the level of corrosion of the steel strand of the beams.

The purpose was to have a quantitative measurement of the health of our UHPC beams, comparing them with a reference (25 MPa concrete).

These UHPC farms were installed in 2017, and the results after 5 years confirm what we figured out: There’s no risk of corrosion in these strands. This was expected because the prestressed UHPC beams remain uncracked under service, and the compactness of the matrix is so high that chlorides will require hundreds of years to reach the reinforcement.

After monitoring these beams, we wondered if we could go beyond, and we proposed in the H2020 project ReSHEALience to build a raft to see how cracked UHPC behaves under an aggressive environment (XS). We designed each beam with different prestressing level and fiber content to induce in them different crack sizes, so that the initiation of the corrosion of the strands is different in each beam. To assure the success of the test all the beams needed to be “damaged”, so we microcracked them in the factory, simply elevating them from the center of the span.

On this cracked UHPC raft, we installed the durability monitoring system in the ten beams and an two references (H25 and H90), so that we can compare the durability of different types of microcracked UHPC with uncracked HPC (H90).

Well, this monitoring has been working for already 22 months, and I am plotting below what has been observed after 610 days.

As you can observe, after approximately 300 days the intensity of corrosion in the reference beam made with poor concrete (H25) is already between low and moderate, so propagation started before the end of the first year. In fact, if the total electrical charge (Coul/cm2) of beams is plotted with the time, it can be seen that the “amount of corrosion” up to now is significantly higher for the H25 concrete than for the others. At the same time, it can be seen how the uncracked H90 beam starts having a higher value than the rest of the beams (cracked UHPC).

This implies that, after 2 years of testing, we are having good results towards proving that microcracked UHPC is, at least, as durable as uncracked HPC, if not more. This means a lot to us, because certain structures for aggressive environments could be designed more easily (and more competitively) if we accept that they can microcrack during the commissioning or under service.

Obviously, the remote monitoring of our UHPC floating farms is still ongoing, providing everyday more empirical proof of their extreme durability, even in microcracked state. 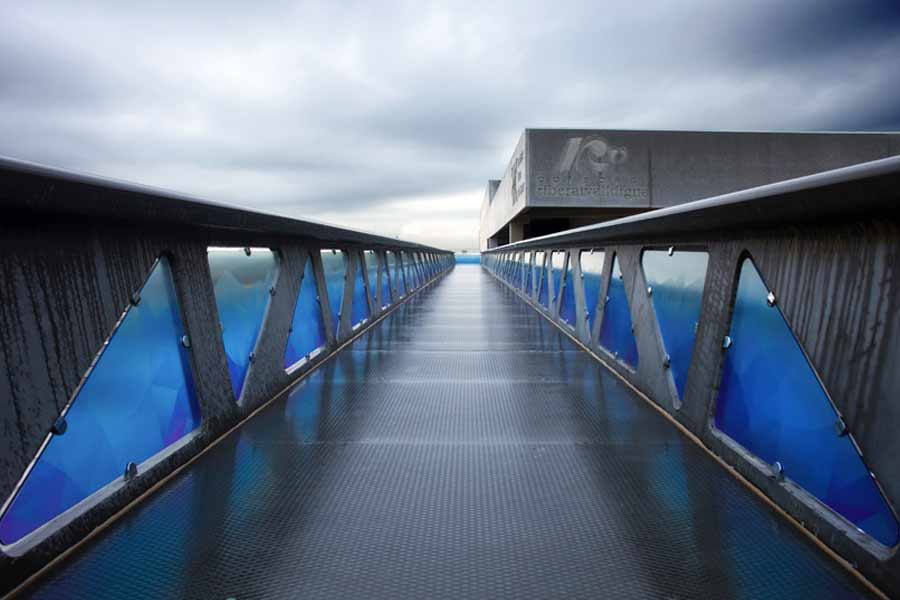 Menú
We use cookies on our website to give you the most relevant experience by remembering your preferences and repeat visits. By clicking “Accept All”, you consent to the use of ALL the cookies. However, you may visit "Cookie Settings" to provide a controlled consent.
Cookie SettingsAccept All
Manage consent

This website uses cookies to improve your experience while you navigate through the website. Out of these, the cookies that are categorized as necessary are stored on your browser as they are essential for the working of basic functionalities of the website. We also use third-party cookies that help us analyze and understand how you use this website. These cookies will be stored in your browser only with your consent. You also have the option to opt-out of these cookies. But opting out of some of these cookies may affect your browsing experience.
GUARDAR Y ACEPTAR