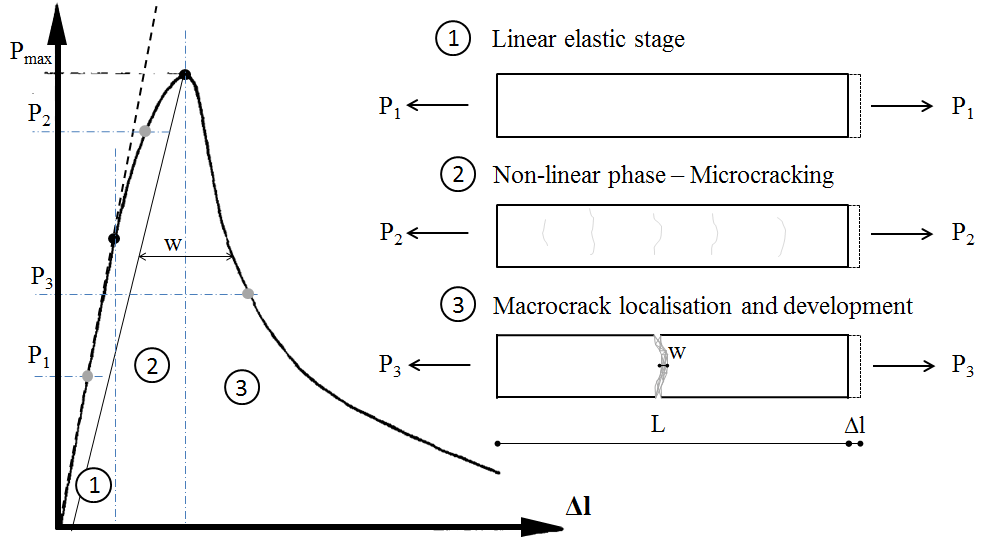 High performance in tension is probably the most important feature of UHPC, and fibres are responsible for that. They play a major role in ductility, crack control, durability and strength.  As they also represent 60-80% of UHPC cost, it is completely necessary to understand how they work, i.e. tensile response of UHPC. Its knowledge and suitable consideration in design is a must to achieve safe and competitive designs.

With this purpose we start a series of posts dealing with the tensile performance of UHPC. I always like to start with a little bit of background. UHPC tensile behaviour can’t be fully understood without a previous knowledge of the tensile behaviour of plain concrete. Let’s start with it and with some interesting notions you may not know about its response and scale – effect.

Warning: It may be kind of tedious to read if you don’t have basic knowledge on concrete design !!

From the first standard code for concrete appeared in 1903 in Switzerland, tensile behaviour of concrete have been a secondary property as (i) it has a minor influence in design and (ii) the necessary tensile parameters in design, such as shear strength, bond strength or flexural strength, can be easily obtained from compressive strength. In fact, compressive strength is the only mechanical parameter required in current concrete design codes, while contribution of tensile strength in design is so small that is commonly neglected.

Despite that, from the 1960s large amount of research resources on concrete technology were focused on the determination and characterisation of tensile properties of concrete. What was the reason for that?

Why was concrete tensile behaviour of interest for researchers?

Around the middle of the 20th century, researchers and engineers realised that experimental test doesn’t match linear elastic theory. Strength was smaller the larger the depth of the element !! Why? They couldn’t explain that. And this fact always bothers scientists  !! It could have been merely anecdotal if not for the fact that there was several unexpected shear failures in large depth structures which required further explanation. They had to do something.

The fact that strength varies according to the depth was called scale – effect. Look at the following curve obtained by Professor Arne Hillerborg in 1983. It establishes the relationship between the flexural strength (σmax) to tensile strength (ft) ratio according to a normalised specimen depth (h/Lch).

Note 1: Flexural strength is defined as the maximum bending moment resisted (Mmax) divided by the elastic section modulus (Wel). It has units of stress and represents the maximum tensile stress reached at the most tensioned section layer considering a linear elastic material behaviour. 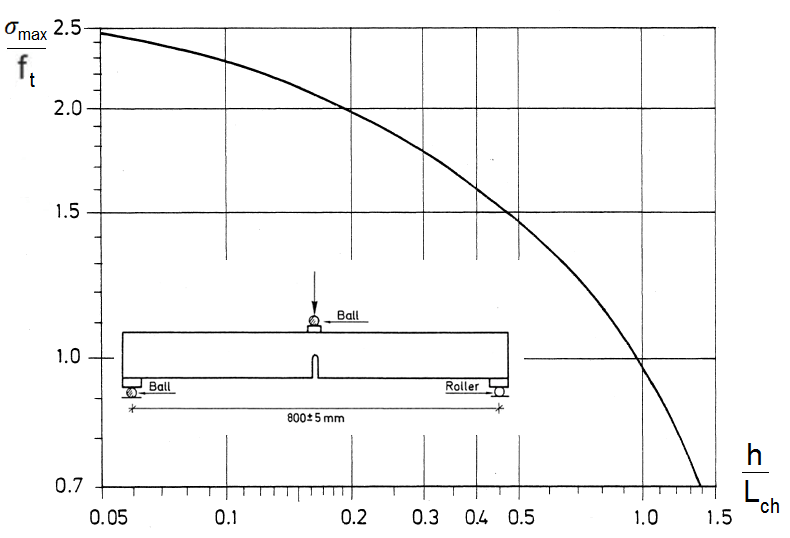 This curve proved that:

(i) flexural strength is higher than tensile strength in small specimens

The main problem is that linear elastic theory expects the flexural strength to match tensile strength, i.e. expects maximum strength in bending when tensile strength is reached in the most tensioned layer. According to Hillerborg’s results, it wasn’t the case. A new approach was required. A fracture mechanics approach !!

Whenever fracture mechanics appears, most of engineers (and most researchers) freak out and flee from it !! Don’t worry, we are NOT going inside fracture mechanics. There is a simpler way to explain this phenomenon. There is one simple reason which requires a more detailed explanation. Let’s get into it.

Let’s move back, now to 1966. It was the first time it was possible to register a complete tensile response of plain concrete in a direct tensile test, thanks to Hughes & Champman experiments. The curve they obtained was similar to that shown in the following picture. It represents the elongation increase (ΔL) of a concrete specimen when it is subjected to uniaxial tensile load (P). According to this response, three different phases can be distinguished.

Phase 1 is a linear elastic phase. During this phase tensile response of concrete is linear, i.e. increase of load is proportional to the increase of elongation.

During phase 2, tensile response loses its linearity. Non-linear behaviour in concrete is due just to one thing: cracking !! Several microcracks appear in concrete but invisible for the naked eye. We know they are there just because the non-linear response.

Phase 3 starts at tensile strength of concrete (maximum load). At this moment a crack appears. The crack can’t hold this load (or anyone higher), so if we kept it, specimen would suddenly break into two different blocks. However, if the press used is good enough, it is possible to accomodate the load to the increasingly smaller bearing capacity of the specimen. Once the tensile strength has been reached, the increase in elongation is due to increase of the crack opening (w). The larger the crack opening, the smaller the stress than can be transfer through the crack, i.e. the smaller the load the specimen can hold. At an specific crack opening value (wc), no load can be transferred and concrete specimen breaks into two different blocks. Phase 3 is the so-called softening response of concrete.

Concrete is not a brittle material but a quasi-brittle one, i.e. when a crack appears concrete is able to transfer a “stitched force” between the two crack planes according to the distance between them, which is called crack opening. This is the so-called softening behaviour of concrete which has two main consequences: (i) makes concrete a quasi-brittle material, instead of a britlle one, and (ii) becomes the responsible of the scale-effect found on it.

So, it turns out that concrete is quasi-brittle material !! Degree of brittleness is a structural parameter (depends on the element size) not an intrinsic one !! These scale effect phenomenon is already included in current design codes, just see section 3.1.8 and 6.2.2 of EC-2 !! Have your ever noticed that? Strength depends on element depth in quasi-brittle materials.

In which range of crack openings plain concrete is able to transfer stress?

In case of plain concrete, the crack opening range in which concrete is capable of transferring load between the two crack planes is quite small. Let’s take a look at the simplified tensile response for a 30 MPa compressive strength concrete found in the Model Code 2010 (MC2010). 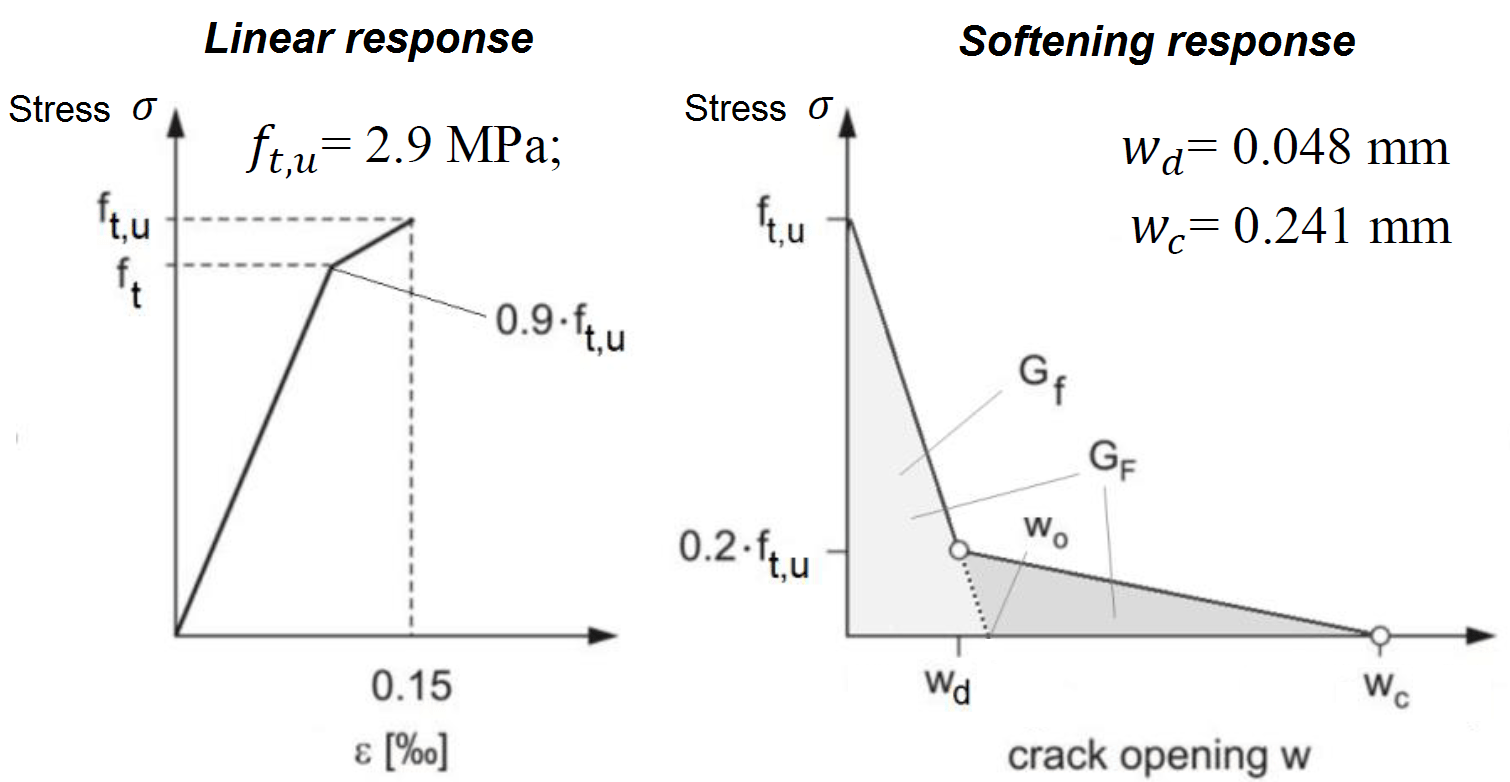 Look how small crack opening values are. A typical crack opening in design is 0.1 mm. At this crack opening, look how little stress plain concrete can transfer through the crack. That’s the reason why tensile contribution is neglected in design !!

From the previous discussion we can highlight:

1.- Tensile response should be described using two different curves: (i) a bilinear stress – strain relationship up to tensile strength characterised by a linear and a non-linear phase due to microcracking; and (ii) a bilinear softening stress – crack opening relationship

2.- There is a scale – effect in concrete, i.e. flexural strength to tensile strength ratio depends on the specimen depth.

3.- Scale – effect is caused by the ability of concrete to transfer stress between the two planes of a crack (softening response), or in other words, due to the quasi-brittle nature of concrete.

But, what has the softening response to do with the scale – effect? How flexural and tensile strength are related to each other and to the softening behaviour of concrete? We will answer this question in the next “Learning UHPC” post !!