In the first post of "Tensile behaviour of UHPC" we defined the uniaxial tensile behaviour of plain concrete using both a stress-strain relationship up to maximum load and a stress-crack opening relationship from this point onwards up to a maximum crack width. We explained that one of the main consequences of the ability of concrete to transfer a "stitched force" between the two planes of a crack according to the distance between them (crack opening) is the fact that strength depends on specimen size, what is commonly called scale-effect. It could have been a minor issue for science if not for the fact that linear elastic theory couldn't predict that. In this post we are going to explain (i) the concept of equivalent flexural strength; (ii) the nature of the scale-effect phenomenom, (iii) the way we can easily consider the scale-effect by correcting softening stress-strain behaviour according to structure depth and (iv) some notions about brittleness. Warning 1: We strongly recommend to read post (I) before digging into this one !! Warning 2: It may be kind of tedious to read if you don’t have basic knowledge on concrete design !! Let's get started !! In the first post of “Tensile behaviour of UHPC” (click here to see it) we defined the uniaxial tensile behaviour of plain concrete using both a stress-strain relationship up to maximum load and a stress-crack opening relationship from this point onwards up to a maximum crack width. We explained that one of the main consequences of the ability of concrete to transfer a “stitched force” between the two planes of a crack according to the distance between them (crack opening) is the fact that strength depends on specimen size, what is commonly called scale-effect. It could have been a minor issue for science if not for the fact that linear elastic theory couldn’t predict that. In this post we are going to explain (i) the concept of equivalent flexural strength; (ii) the nature of the scale-effect phenomenom, (iii) the way we can easily consider the scale-effect by correcting softening stress-strain behaviour according to structure depth and (iv) some notions about brittleness.

Warning 2: It may be kind of tedious to read if you don’t have basic knowledge on concrete design !!

One of the main problems that linear elastic beam theory had to face was the fact that experimental tests showed that flexural strength of concrete varies according to specimen depth when it was supposed to keep constant. We should not confuse bending moment capacity with flexural strength. So, what is flexural strength?

According to the way we obtain flexural strength, we can give following general definition:

However, if we want to understand the physical meaning, next figure can be helpful. On it, we have represented a four point bending test carried out on a square cross-section specimen with depth (h) and span (L) at maximum load. It has also been represented an hypothecial stress distribution in the failure section. Red area represents the area under compression, while blue area represents the area under tension. As there are no axial forces, both areas are the same.

Note that a crack opening equal to zero corresponds to the initiation of softening once matrix tensile strength is reached.  As this test is an statistically determined configuration, maximum bending moment (M) can be easily obtained according to load applied. Bending moment distribution has also been represented in yellow. Obviously, bending moment obtained from the integration of the real stress distribution must coincide with that. 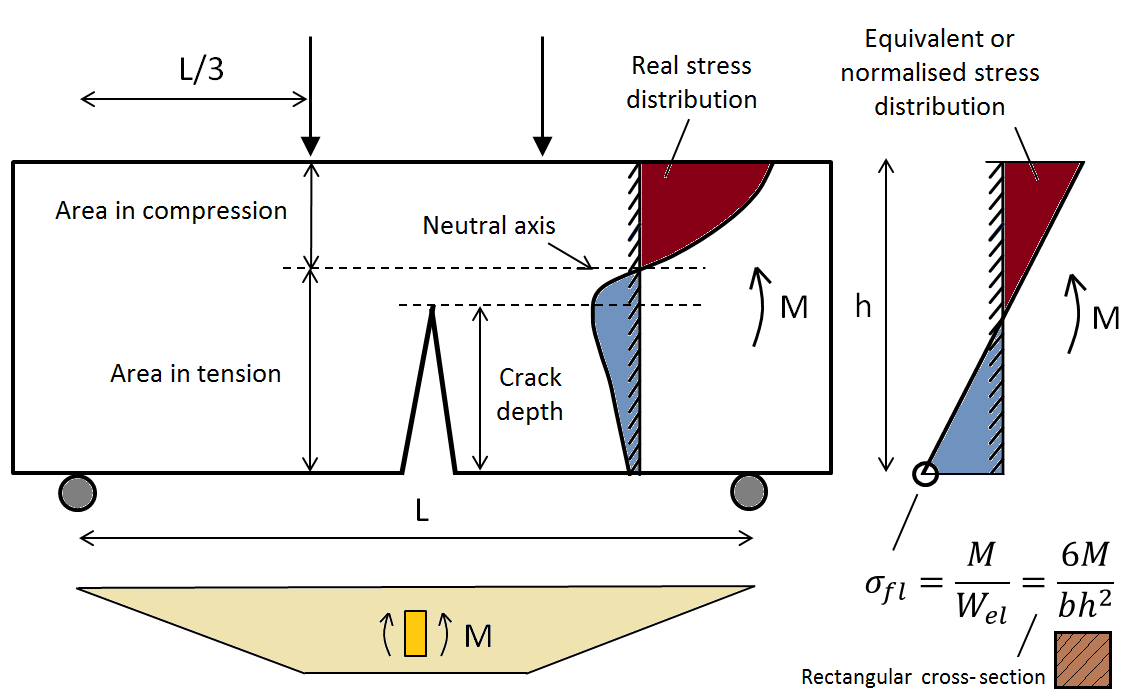 What would have been the maximum tensile stress reached at maximum bending moment if the material had behaved as a linear elastic one? – Flexural strength

Once we know this concept, following step is to make a numerical analysis of the flexural strength versus normalised displacement of a specific concrete in a bending test using different depth values. We have introduced the normalised displacement parameter defined as the ratio between any displacment obtained and the linear elastic displacement reached when the maximum tensile stress achieved in the cross section is equal to tensile strength of the matrix. Just to obtain a more meaningful picture 🙂

We run the numerical model for 5 different beam depths: (i) 1 mm; (ii) 50 mm; (iii) 150 mm; (iv) 300 mm; (v) 600 mm. We are aware that using a 1 mm depth specimen has no physical meaning, but it can give some interesting information. Following curve represents the flexural strength to matrix cracking strength (ft) versus normalised displacement for the last four beam depths.

As it can be clearly seen, we can draw some conclusions:

Why could that sentence explain the scale-effect? To answer that we have made following figure. On it we have represented the stress distribution at maximum bending moment along the specimen depth. Take a look at it. 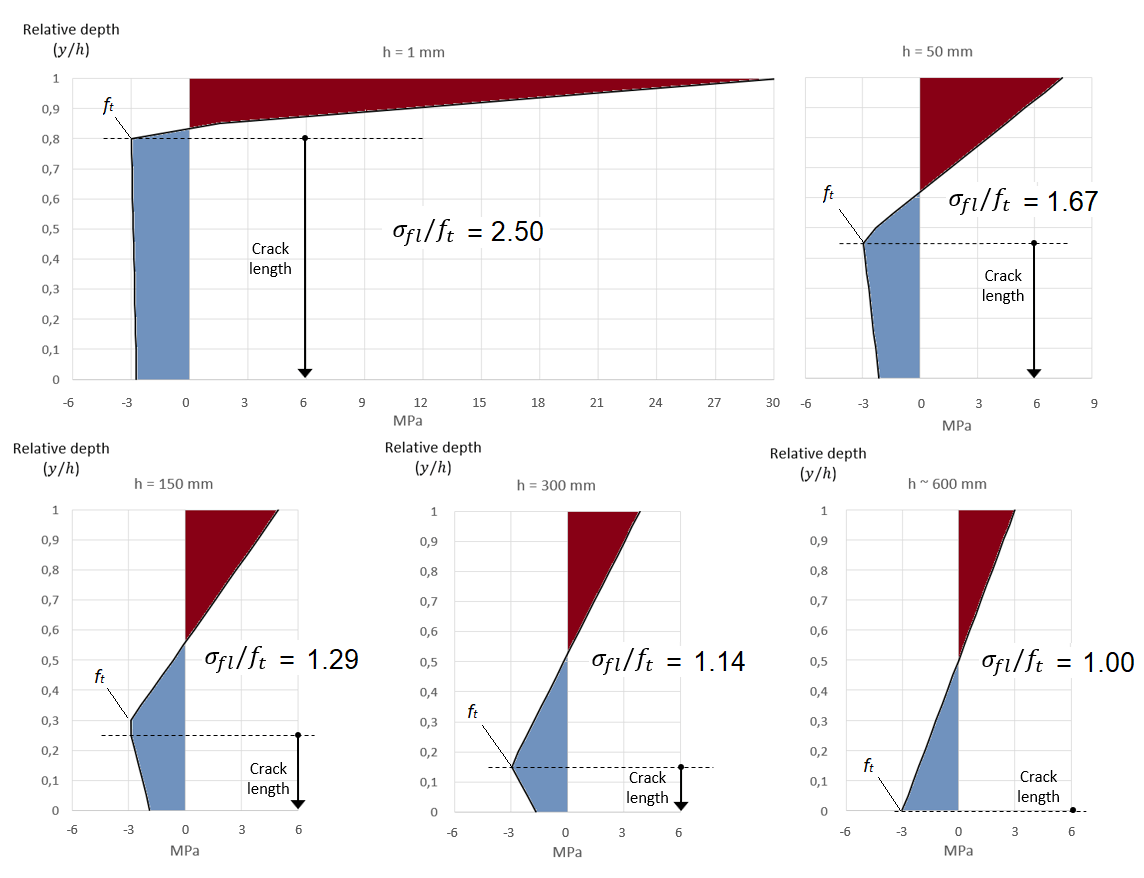 After seeing this picture, we can notice that:

(i) Stress distribution at maximum load varies according to specimen depth

(ii) Maximum bending strength is achieved when concrete is already cracked as it is able to transfer stress between the two crack planes. That is what justifies scale-effect phenomenon

Looking at the two previous figures we can make the two following appreciations:

(ii) As specimen depth decreases, concrete behaves more and more similar to a perfectly plastic material, increasing its rotation capacity and its ductility. According to that, there is also an upper limit for flexural strength when specimen depth tends to zero (assuming that an infinite compressive strength and curvature are physically possible), which is three times the matrix cracking strength, according to plasticity theory. These two lower and upper limits can be seen in following picture. Flexural strength in quasi-brittle materials, such as concrete, varies from 1 to 3 times tensile strength according to specimen depth and fracture energy of concrete.

Knowing that, it is now easy to understand the formulation proposed by Model Code 2012 to obtain the flexural strength according to tensile strength and specimen depth. Now, we know the reasons for that equation. But don’t forget one thing: concrete is already cracked once flexural strength is reached !! 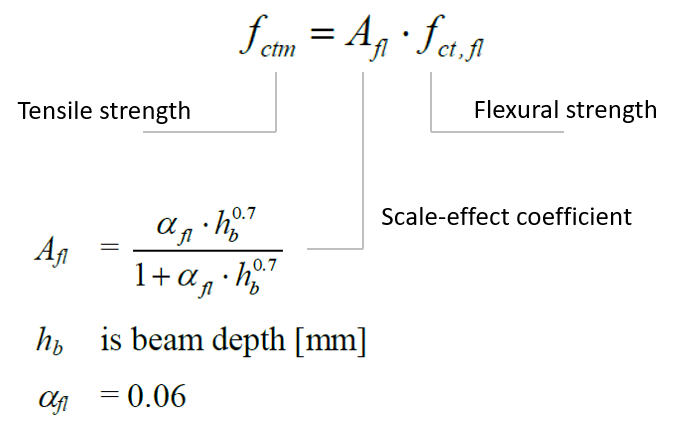 Engineers are commonly used to carrying out sectional analysis calculations using stress-strain constitutive relationships. However, constitutive relationship of the C30 used is based on a stress-crack opening behavoiur. Could be turn the softening stress-crack opening behavoiur into a stress-strain one? Yes, it could. But guess what, this transformation has to be done according to the structure depth !!

The most common way to turn the stress-crack opening relationship into stress-strain one is to divide the former one by a length parameter which is proportional to the beam depth. This length parameter is commonly called the “characteristic structural length”.

Look at the previous figure. There is a certain depth in which softening behaviour is vertical, leading to a perfectly brittle behaviour. The depth from which concrete behaves as a pure brittle material is called “characteristic length” and is a material property. You can follow the process to obtain it in the following picture !! 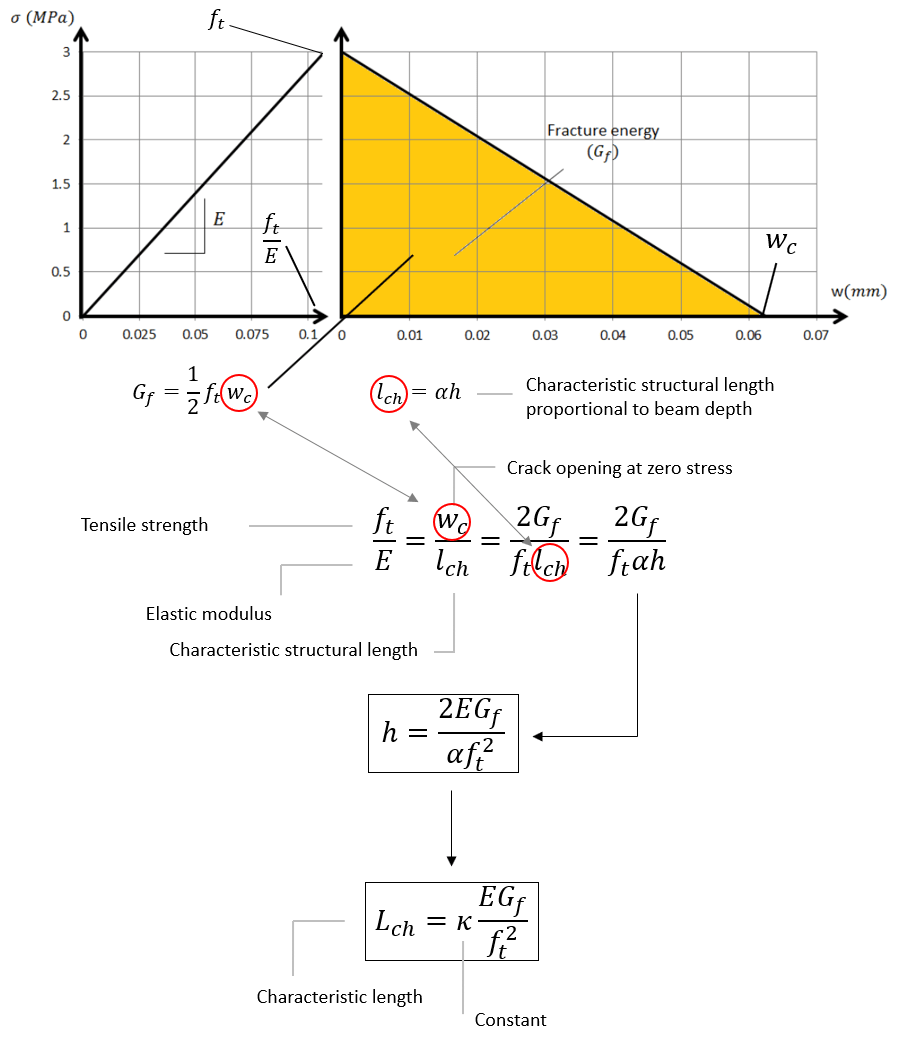 So, how could be improved brittleness (same thing as increasing characteristic length) when dealing with ultra-high compressive strength concretes? Using fibres !! Fibres provide larger fracture energy !! That is why the use of fibres is mandatory in UHPC, to ensure a minimum ductility requirement !!

If the size of your structure is higher than the characteristic length of the material, be careful cause tensile strength can be even lower !! But don’t worry, the size of most common concrete structures is lower than characteristic length of concrete, and when concrete is combined with steel reinforcement this effect can be neglected. It only affects to plain concrete !! Therefore, in case of reinforced concrete we can neglect tensile contribution of concrete !! 😉 This is something we already knew. However, it has a huge influence in case of fibre-reinforced concrete.

Even though this post may be quite tedioius to read, these notions are important to define and understand UHPC tensile behaviour. What is the tensile behaviour of UHPC? Is it different from plain concrete? Too much? These question will be answered in the next post of “Learning UHPC” section. Don’t miss it !! 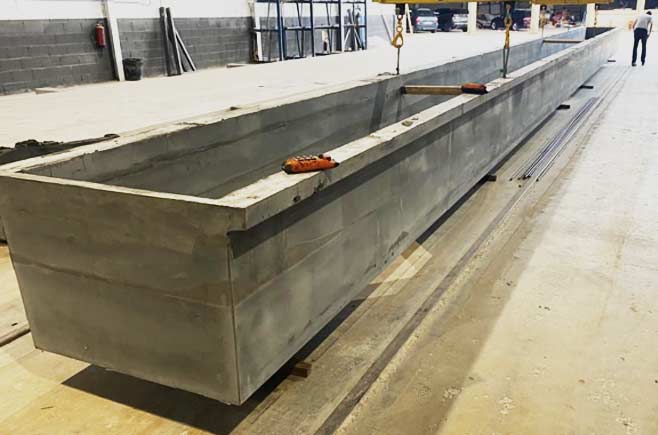 Where has UHPC the highest potential to grow? 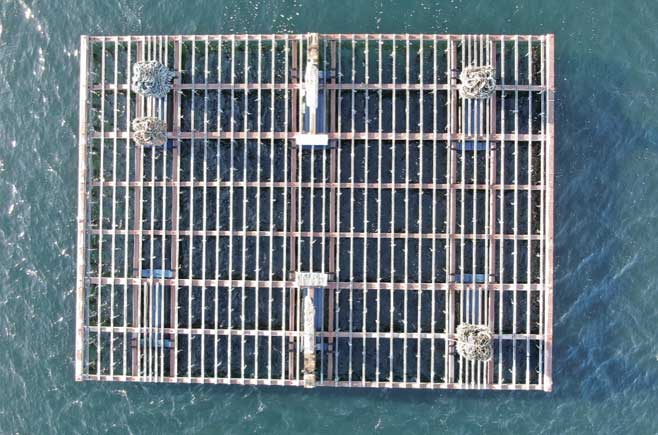